What do you do when Harry Rinker, noted aficionado in the antique world, calls and asks you to “go antiquing?” You jump at the chance and, of course, immediately say yes!

For many years, Harry has been a featured contributor to The Antique Register and our sister publication, The Country Register. I have enjoyed reading his columns so to have an opportunity to meet him and spend time watching him “work” was an unexpected privilege.

Harry Rinker has a long list of credentials starting with over 30 years of weekly syndicated columns that appear in trade papers and daily periodicals from coast to coast. He is the host of a nationally syndicated antiques and collectibles radio call-in show, Whatcha Got?, that airs on Sunday mornings from 8 to 11 a.m. EST and streams live on www.gcnlive.com. His biweekly blog is posted on rubylane.com.

A prolific antiques and collectibles writer, Harry has had more than twenty books and guides in several editions published from 1985 to 2008. He is a frequent television and radio guest on shows such as Oprah, Martha Stewart Living, Inside Edition, and the Today Show, just to name a few. He makes guest appearances at antique and trade shows, educational institutions, museums and historic sites where he lectures and/or conducts verbal appraisal clinics. His collection management, valuation and market analysis skills have been utilized by corporate and private clients. And selections from his extensive private collections have been featured in exhibitions at museums, historical societies and antique shows.

Harry has a BA from Lehigh University, an MA from Washington University of St. Louis, an MFA in Professional Writing from Western Connecticut State University and a PhD in American Decorative Arts with minors in American History and History of Science/History of Technology from Breyer State University. Having taught at several colleges and universities, he currently serves as an adjunct professor in the Davenport University Department of English and Communications.

And that is only part of “the inside scoop” on Harry Rinker! To say that I was excited and a little intimidated about spending time with this icon of the antiques world is an understatement. But I headed out with much anticipation for the afternoon—and what a fun time it was, not to mention educational and eye opening.

Harry had not been to Phoenix in nearly thirty years—and this was a fast trip—so he and his wife had already explored some shops near their Scottsdale hotel that morning before she went to her conference that had brought them to town.

Our afternoon began over lunch, and I was fascinated listening to Harry talk about his career, the antique industry and collecting. He is very down to earth and easy to be with and not intimidating at all. His knowledge is astounding and yet he still has a thirst to learn and see more. Even after a more than 30-year career, he has not lost his passion for “the search” or sharing the antiques and collectibles he accumulates.

After lunch, we were off to antique and headed to Antiques on Central, which was close by. Harry was warmly greeted by Doris Leis, one of the owners, and some of the staff. 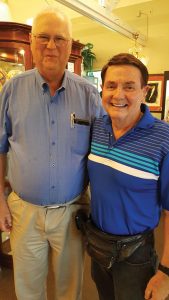 Visiting an antique store with Harry Rinker can be a lot of fun. First, Doris told us that she had taken an antiques course taught by Harry several years ago and was especially delighted to see him again. Then, as we started walking around, a man came up and asked in surprise, “Harry Rinker?” It was someone whom Harry has known for years but had not seen in quite a while—Bob Page, founder and CEO of Replacements.com—and they greeted each other warmly. Bob was in town on a buying trip and the two men chatted while Bob’s purchases were being packaged.

Walking through an antique mall or shop with Harry is fascinating. Because of his exceptional knowledge, he recognized the rarity of several pieces, explaining in detail their origins and values. Having one of the foremost antiques’ experts as my personal guide was an incredible experience.

Harry was quite complimentary about Antiques on Central’s mall, commenting on the nicely organized displays and the openness of the aisles. He was appreciative of the beautiful antiques on display and even found a collectible to purchase—mostly because of its sentimental appeal since it was similar to a plaque that had hung over his bed as a child.

We had a little time left before Harry had to be back at his hotel so we explored some additional areas featuring shops that I suggested he visit when he returns to Arizona. Harry has been all over the world antiquing and yet he was interested in what our state has to offer.

Harry was very generous in sharing with me the aspects of antiquing that provide him with material for his articles and blog. Spending an afternoon with this enthusiastic man of many talents and accomplishments was incredibly inspiring and has caused me to think about learning more—and to go exploring even more!

My time with Harry ended far too soon and I invited him to come back to our Valley and beautiful state to explore more of our wonderful shops and malls. It would take many afternoons to explore all the delightful places here in Arizona but I would happily offer to go antiquing with Harry Rinker any time!