I cringe now at the thought of having missed a perfect repurposing opportunity, but I was young and hadn’t been initiated into that uniquely creative world then. It won’t happen again!

Most of us know the three Rs of Sustainability:  Reduce, Reuse, and Recycle. There’s a fourth R and it is fabulous—Repurpose.

My education started sometime after I spent a challenging week renovating an abandoned house in Phoenix that we bought at auction. At the time, it felt like I was participating in something really great by improving the dilapidated property, knowing that it would help revitalize the neighborhood where it was located. We spared no expense on the new windows, doors and stucco that were badly needed. That home would look great when we were done.

Of course, in the process we tossed all the old stuff we pulled out of the house—because I just didn’t know any better. But don’t worry; I have repented of my former careless ways thanks to my friends at Merchant Square Antique Marketplace.

When I told them about the renovation, my friends winced at the thought of my trashing ninety-year-old windows. They took me to a booth in the store where a similar window lay. Someone had seen the discarded window’s potential, dusted it off and put it up for sale.

My friend asked, “How many kids do you have?”

“Four,” I replied and was told to email their photos.

There were six panes in the window. My friend typed a couple of quotes and printed them along with my children’s pictures. We taped the images on the back of the glass, using each pane like a photo frame and—well, you can see here how incredible it looks.

That was my introduction to just how exciting repurposing can be—and cheap, since the window only cost me fifty dollars. Just yesterday, a friend commented on how great it looks (photo on page 10). Sure, I’ve got good looking kids, but she was more impressed with the homey feeling this repurposed window brings to my otherwise boring living room.

Although easy, repurposing does take some creativity. If you’re stumped, just search the Internet for that fourth R—Repurpose—and add whatever you’re thinking about sending to the landfill.

The doors from that house we threw away could have been made into any number of repurposed treasures:  a headboard, shelving, wall décor, a hope chest or even a coffee table.

Now I’m on a crusade to save others, like I’ve been saved, from throwing away perfectly good junk with the potential of it becoming something beautiful and amazing once again. I’m not suggesting that we begin hording. Clutter isn’t good for the soul, but before you go trashing old stuff, just ask yourself if that item has any potential for becoming something else. I promise you will be pleasantly surprised at what you come up with!

Jace Sanders is a manager at Merchant Square Antique Marketplace in Chandler. For more fantastic reads and ideas, visit http://www.merchantsquareantiques.com/blog. 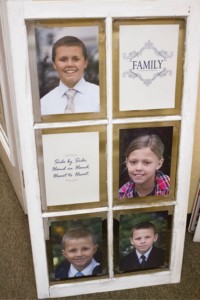