On October 20, 2013, in her 87th year, Jeanne Wright died peacefully in her home from complications due to age. Jeanne was the owner and operator of Cherry Street Antiques at 646 W. University in Mesa. In early adulthood, Jeanne gained a love of antiques from her mother, Norma Nix. Together, they would go on “junking excursions” long before it became the “thing to do.” 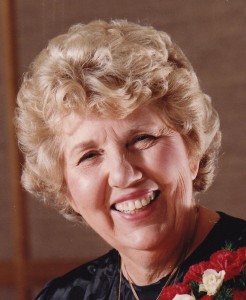 Jeanne began selling antiques many years ago with her daughter, Julie Blair. Recalling their first experience selling antiques, Julie says, “Over 25 years ago, Mom and I rented a space at the Fairgrounds Antique Show in Phoenix. We brought enough stuff to fill 4 booths, but had only rented one. Luckily the person next to us didn’t show, so we were able to squeeze our treasures into 2 spaces. The first item to sell was an antique rocker that Mom brought. After the happy buyer left our booth carrying her purchase, we looked at each other, literally squealed with delight and gave each other a big hug—we were hooked!!!”

After that successful venture, there were many more antique shows, boutiques, flea markets, rented spaces in antique malls, etc. In 2001, Jeanne renovated the house that she and her husband Jack built in the 1940s, which became Cherry Street Antiques. It didn’t take long to fill the shop from floor to ceiling with beautiful antiques. In Jeanne’s first year of business, Cherry Street Antiques was voted one of the best Antique stores in the Valley by the New Times and a couple of years ago she was given that same honor. She also became a member of the Valley of the Sun Antique Dealer Association.

Jeanne loved going to work daily, meeting new people and buying and selling antiques. Besides her antique venture, she was also owner of Jeanne’s School of Dance, an enterprise that eventually included five studios and two youth ballet companies, which served thousands of students spanning over 50 years. She was also selected as Mesa’s Woman of the Year and was later honored by Mesa’s Rotary Cub. In 1989, Jeanne became the state Chairman of the Arizona Jr. Miss Program. In 1995, she was selected as Arizona’s “Mother of the Year.”

While Jeanne’s life was continuous service to her community and church, her greatest treasure was always her family. She is survived by her 6 children, 37 grandchildren and 68 great-grandchildren.  Her family is eternally grateful for the many legacies her rich and long life has left. Her positive attitude, enthusiasm for life, lifting and building up all around her, willingness to cultivate and share her many talents with everyone were hallmarks of her life.

At this time, Cherry Street Antiques is still open Tuesday through Saturday from 10 a.m. to 4 p.m. Virtually everything in the store is being liquidated at 50% off.