Even though I’ve lived in the desert southwest for over 20 years, I’m still a southern girl at heart. I still like big hair, monograms, make up, sweet tea and shiny objects. Everyone at the store knows if it’s shiny, I am mesmerized and distracted. I embrace my love of big and shiny.

My favorite shiny objects usually involve two words—mercury and glass. Mercury glass (or silvered glass) is glass that was blown double walled, then silvered between the layers with a liquid silvering solution, and sealed.

Last month, a customer walked up with a mercury glass tray and I was devastated that I had not seen it first. It would have surely come home with me. I have a gorgeous old mercury glass vase with mercury glass beads that someone tied around the base. It sits on my nightstand and, every night, it makes me smile as I turn off my lamp.

In our home, my husband Tray and I have precious, very old mercury glass Christmas ornaments that I love hanging up, and newer large pieces in a variety of shapes that I mix into tablescapes. I like these really large mercury glass pine cones so much that we leave them out all year long. Mercury glass candleholders brighten up tables and make great contrasts to older, rustic items. You are probably not surprised when I say we feature mercury glass in every room.

I didn’t realize that, while mercury was originally used to provide the coating for mirrors, a heated solution of silver nitrate and grape sugar was used to coat the inside of free-blown, double-sided glass. The pieces were blown using a hollow blowpipe and a long, flat-topped iron tool called a punty rod. After the object was blown, it was cracked off the punty rod and the silvering solution was poured into the hole, known as a pontil scar.

Mercury glass has been made for centuries. Blown glass orbs covered with a mysterious liquid silvering solution are dated to the late 17th century. And by the mid-1800s, tableware, vases and goblets were made in Bohemia, the area now known as the Czech Republic. Mercury glass was patented in England in 1849 by Hale Thomson and Edward Varnish. It was shown at The Great Exhibition in the Crystal Palace in 1851 and praised in “The Illustrated Catalogue” in the Art Journal and in Tallis’s History and Description of the Crystal Palace, prominent publications—the taste makers of the time. Mercury glass was known in England as poor man’s silver and in Germany as farmer’s silver. In America, it was patented in 1855 by Thomas Leighton of the New England Glass Company

When you’re out looking, how do you know if a piece is old or new? There are two big clues—are the walls doubled and are the bottoms solid? Older pieces have doubled walls and the holes in the bottoms were closed with metal or cork inserted into the pontil scar. Often the English pieces were finished with an impressed metal disc covered by a glass waver cemented into the pontil scar. Lead or metal seals with glass discs were used in Bohemian pieces, but the pontil scar often has sharp edges. A simple cork was used in America and pieces made by the New England Glass Company often had a metal disc with NEG.Co., which was covered with a glass piece. Newer pieces have solid bottoms.

Some of the rarest pieces are English because mercury glass was made there for only six years and signed pieces are extremely rare. English and American pieces were made from flint glass with lead in the formula and are often heavy for their size, have thick walls and create a bell tone when tapped. Bohemian pieces are lighter weight because they didn’t contain lead, were blown thin and are often found with gold accents on a frosty satin ground.

Silvered mercury glass was one of the first forms recognized art glass, a glass made just for display rather than for use. I’m partial to the simpler styles rather than the gold-embellished pieces, though I find some of the etched pieces lovely. Our favorite parts of our mercury glass collection are a half-dozen, half gallon bottles clustered together to bring just the right amount of bling to our living room. Even though we’ve had these for a long time, they still stop me in my tracks, take my breath away and make me smile. What’s not to love about that?

Simone Gers began her antiquing journey 35 years ago when she married Tray, an avid collector. They still have the first piece they bought together—a pegged farm table that was so decrepit it was behind the antique store—and they have been upcycling vintage finds ever since. The Gers own Gather A Vintage Market in Tucson, AZ, a monthly market (www.gatheravintagemarket.com). Simone has taught writing and literature at the college level for many years. 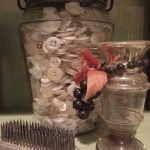 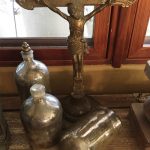 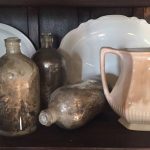