Since the late 1920-30s and the arrival of the great highway that linked the Americas, Mexico tourism has grown by leaps and bounds. Border towns prospered with Americans looking for an easy ‘foreign’ experience and shopping in a much more affordable marketplace as the economy in the States was struggling.

Whether spending a holiday in a warm friendly environment or making a quick day trip across the border, Americans were able to gain quick access to all of what Mexico had to offer at border towns such as Ciudad Juárez, Nogales and Tijuana. Imported further north, these wares were found in finer department stores like W. H. Macy in New York, Kaufmann’s in Pittsburg and Leonard’s in Chicago.

For the more adventurous holiday seekers who ventured into the country of Mexico, there were two major stopping off points. Just outside the second largest City of Mexico at the time, Guadalajara and its neighboring pottery communities of San Pedro Tlaquepaque and Tonalá, you could find an immense thriving artistic center of pottery that had a 400-year tradition in the region.

Tonalá was a thriving community of artisans steeped in the clay traditions, all living and working next to each other. San Pedro Tlaquepaque, not so much, but known for its shops and studios set up for the outside visitor. Among these were Arias, Fernandez and Tonalteca, which was known for its plethora of “live working artists” that tourists would flock to.

A pottery trade emerged, solely based on tourist dollars spent buying highly decorative ‘Tlaquepaque’ pottery—twice fired clay that was dipped in a lead oxide bath for its second high firing. The second tradition is derived from the Pre-Columbian era. Bruñido (burnished, often referred to as ‘Tonalá’) is made of soft clay that was hand built or molded. Then the unfired clay is painted with pigments/minerals and fired only once.

As the decades progressed and the roads got wider, pottery centers in nearly every state became sought after by the tourists and collectors. Artist families grew and made their livelihood from it and it is these pieces that modern collectors seek out. Though, at the forefront, it is Tlaquepaque and Tonalá that many antique and Mexican Folk Art collectors seek out today. A good number of these pieces bring a hefty dollar.

These pieces originally were sold at modest prices when produced. Collectors enjoyed a renaissance of finding affordable pieces all the way through the 1990s. Then, with the rise of the World Wide Web/Internet and Schiffer Publishing’s collector and dealer Donna McMenamin’s book, Popular Arts of Mexico 1850-1950, things drastically changed—increasing both the exposure and value of this pottery.

• Rain/Night – Dots or patterning of dashes along a color field, usually flora and fauna in foreground.

• Fantasia – Animals, insects and flora grouped in an all-over patterning or composition; fantasy-like, hence the name.

• Tlaquepaque – Common word used for the glazed pottery depicting everyday imagery, landscape of the times or of ‘Old Mexico.’

• Feathered or Grabber – General name given to burnished pieces depicting flora and/or birds in a circular expressive motif.

Names you should know:

• Balbino Lucano – He, his two brothers and collected offspring produced some of the finest examples of ‘Petatillo’ and ‘Tlaquepaque’ for decades.

• Amado Galván – Photographed by Edward Weston in 1926, which would turn him into the first ‘star’ of Mexican Folk Art.

• Josefina Arias – Proprietor. Many of the finer examples of pottery (insignia stamped underneath) were from her shop in Tlaquepaque.

• Fariás – Father and son, Ixta, opens studio in the late 1800s, forever changes the output of work being produced in Tonalá.

• Doctor Atl – Founded a decorative school in Tonalá and authored one of the first books on the subject.

• Solís and Jimón – Both patriarchs of pottery families that would go on to produce many decades of ‘Tonalá’ pottery. 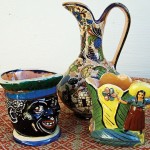 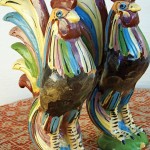 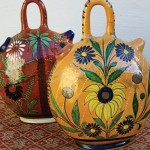 Collected by tourists visiting Mexico in the 1920-30’s 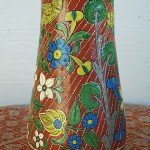 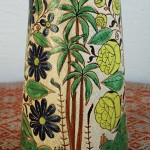 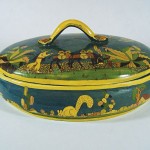 ‘Tlaquepaque’ pottery—twice fired clay that was dipped in a lead oxide bath for its second high firing.