The great American front porch provided many things in the past. Among them was the perfect postcard of people just sitting and enjoying. Back then, that good feeling from just sitting on the porch, “had something to do with human wiring,” observed Michael Dolan, author of the best-selling book, The American Porch: An Informal History of an Informal Place.

Historians generally suggest the front porch began to gain importance by the latter 1860s when styles with names like the American Bracket or Italianate grew popular. Houses with two or three stories were decorated with ornate arches and eves, fancy windows, and a full front porch.

“The porch grew to be much, much more than simply an exterior embellishment or architectural detail during the Victorian era,” writes Ellen Plante in the enriching book, The Victorian Home. “The porch eventually became a significant part of the home—an extended living area during the warm months and the site of many a casual gathering or festive social function.”

Now the porch, or what some called the veranda, became central to living. Family and visitors could visit in its open air. They could wave at those who passed by, and watch the children as they played on the lawn. In the moonlight of the summer evenings, certain courtship was also expected there.

“Usually, but not always, the front porch had a railing on which one could sit if all the chairs were occupied,” noted Everett Wilson in the volume, Vanishing Americana. “The front porch was equipped with various types of chairs, including rockers, and generally had a swinging settee suspended by means of chains from hooks on the ceiling. The chains almost always creaked.”

By the latter 19th century, “the porch was often lavished with as many as three or four exterior colors and an abundance of gingerbread trim provided an eye-catching blend of materials and patterns,” relates Plante.

According to that reference, the grand porch often became a “parlor of sorts” during the summer where proper Victorians sometimes served lunch, tea or even breakfast, to family and friends.

Real photo postcards from the early 1900s faithfully capture scenes of serene folks on their front porch surrounded by children or perhaps the family pooch named Fido. Such postcards were in black and white, but it was standard practice even then to sometimes paint the porch ceiling light blue in imitation of the sky. Meanwhile, floors of the porch were painted in protective white, green or gray.

Postcards of that same era reveal sprocket porch fences, gingerbread lattice work and wide wooden steps in front of the porch. Likewise, they show an abundance of rocking chairs, settees and painted railings.

The front porch in America was the true middle ground of early 20th century living according to author Dolan—not inside and yet not outside. “The porch was a welcome zone,” he said, “but not as intimate as, say, the kitchen.”

Such a porch was the place, he told one interviewer, where folks would say, “Let’s see if we like these people enough to invite them inside.” The very best porches, in his opinion, were those that afforded “human interaction,” being not too high off the ground or too far from the street.

Over the early decades of the 20th century, life on the front porch may have gradually become less formal and more laid back. Writing of life in the 1930s in the novel, The Heart Is a Lonely Hunter, Carson McCullers described what might have been a typical porch scene: “Their Dad leaned back in the chair with his sock-feet on the banisters. Bill was on the steps with the kids. Their Mama sat on the swing fanning herself with the newspaper. Across the street a girl in the neighborhood skated up and down the sidewalk with one roller skate. The lights on the block were just beginning to be turned on, and far away a man was calling someone.”

Sometimes the front porch was embellished to make it more livable and more available in all kinds of weather. Screens warded off flies and mosquitoes, storm windows sealed out the cold and special siding and fitted doors kept the inside air tolerable. In some cases, old-timers referred to their conversion as a sun-porch.

For all of its spacious splendor and social stimulation the front porch eventually began a steadfast demise. One account, the Decline of the American Front Porch cited by Scott Cook, suggests it began immediately before and after World War II (1940s). It was a point in history when the front porch became, “a relic of the past, an architectural feature and cultural symbol no longer important to Americans.”

Cook, Plante and lots of others blame the automobile for more or less replacing the front porch.

But there were other reasons as well. While the street scene grew busy with traffic and sight-seekers, the backyard had changed too. No longer was it the location of sheds, stables, chicken coops and even out houses. Now the backyard was relatively clean and pastoral.

Writing in the early 1960s, author Everett Wilson wrote in Vanishing Americana that it was already patio time in the backyard: “The successor to the front porch, of course, is the patio, which instead of being out front is in the back where the family can relax in a much more informal manner than was deemed proper in front. Now Dad can demonstrate the gentle art of barbecuing, and everyone can indulge in sun bathing. All that’s left of the front porch on the modern home is a small stoop where you wait for the door to open.”

Along the way there was also air conditioning, which substituted the unpredictable outdoor breeze for a single thermostat setting. And there was the lure of television over random neighborhood conversations, and general lack of sidewalk socializing.

The front porch is still remembered in songs like one John Cougar Mellencamp sang, “Grandma’s on the front porch with a Bible in her hand, sometimes I hear her singing take me to the promised land.” And, too, in vintage postcards—but it is seldom seen anywhere else.

Robert Reed, author and writer, has directed Antique and Collectible News Service for the past 25 years providing 1,500 articles and numerous books. Reed’s 18th book, Lincoln’s Funeral Train: The Epic Journey of Mourning Over 1,700 Miles of America’s Heartland, is due out in early 2014. Robert Reed, Antique and Collectible News Service, PO Box 204, Knightstown, IN 46148. 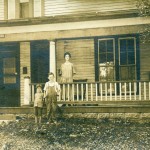 Mother and children pose at the front porch of their home in early 20th century USA. Real photo postcard. 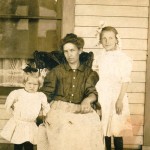 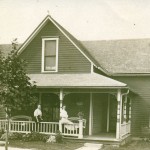 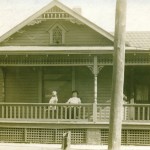